Sorry your pet may not be eligible for insurance currently 😞
Oops! Something went wrong while submitting the form. 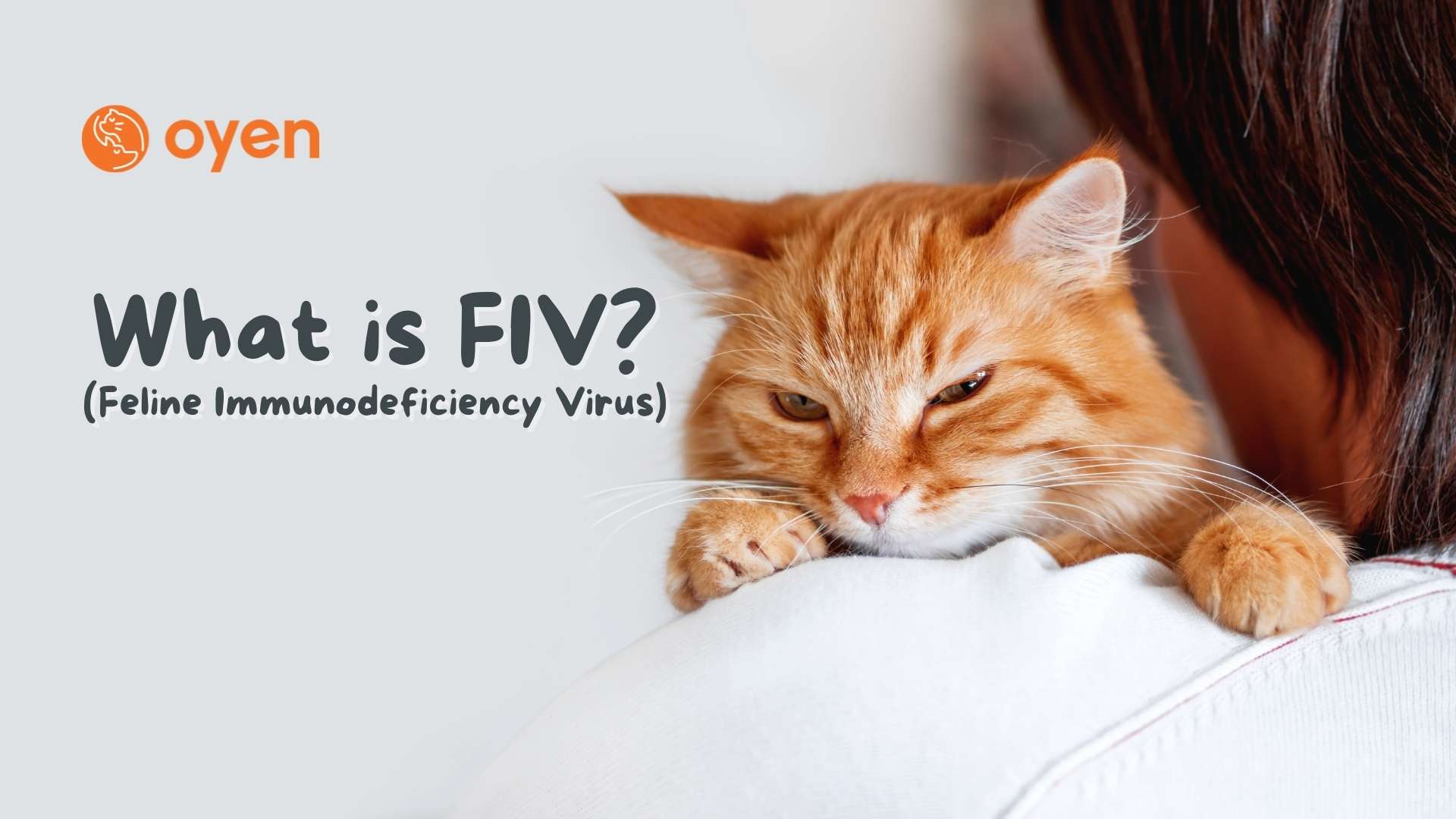 Similarly to HIV, there is no cure for FIV in cats, but the latest advances in veterinary medicine have led to treatment options that can enable an infected cat to live a long and happy life.

Here’s everything you need to know about FIV & cats, or as some folk say, HIV in cats or cat AIDS.

The most common mode of transmission of FIV is if an infected cat bites another. It is, therefore, more common if your outdoor kitty is exposed to wild, feral cats who are known to carry the virus.

Like HIV in humans, FIV in cats can also be sexually transmitted and from an infected mother to her unborn kittens.

It is not known to spread via contact or droplets. So sharing a food/water bowl or toys isn’t harmful. That being said, it is prudent to have all other cats in the household tested if you have a kitty diagnosed with FIV.

2. What Are The Common FIV Symptoms?

FIV infects white blood cells which is a main proponent of the immune system. An infected cat won’t exhibit any symptoms for years. It is until the immune system is significantly compromised that you’ll start seeing symptoms like:

If your cat starts to exhibit any of these symptoms or if they are frequently getting sick, it’s always best to consult your vet.

A simple blood test is all that’s required to diagnose FIV in cats.

Symptoms of progressive disease or the final stages of FIV include chronic and recurrent intestinal, respiratory and neurological diseases (when the gut, lungs and brain are affected)

Unfortunately, there isn’t a cure for FIV in cats.

However, with a nutritious diet and aggressive treatment of secondary infections, it’s quite common for an infected cat to live for many years with the disease.

Consult your vet for a diet high in Omega-3 and Omega-6 fatty acids, antioxidants and vitamins.

While there is a vaccine for FIV, its efficacy remains controversial. Once injected, it will also mean that your cat will have a positive blood test for FIV, which isn’t very helpful. Do consult your vet if the FIV vaccine is suitable for your cat.

Of course, it is. There is no way that humans can contract the virus from cats. However, it is important not to let your cat outdoors or be in contact with other cats, which it can potentially infect.

Some people tend to confuse FIV with the Feline Leukemia Virus (FeLV). They cause similar symptoms and are both from the same retrovirus family. They are, however, different diseases. It is common that a cat infected with FIV can be infected with FeLV at the same time. This makes its chances of survival much, much worse.

As mentioned above, if diagnosed early and treated aggressively for secondary infections, an infected cat could live almost to its normal lifespan.

It also depends on the stage of disease at which it is diagnosed and the quality of care it receives.

7. How Much Does It Cost To Treat FIV?

As the disease is characterised by immunodeficiency and your cat picking up recurrent infections, this only means multiple trips to the vet for treatment.

An early and extensive pet insurance policy will go a long way in ensuring your kitty receives the best care available when it needs it the most.

8. Is FIV Common In Malaysia?

According to a study conducted between 2010 and 2016, around 10% of a randomly selected sample of domesticated cats in Malaysia were found to be positive with FIV.

The study also found that male adult cats are at a higher risk of being infected with FIV.

While it may not be on any first-time cat owner’s lips, FIV is a real and existential threat to your kitten’s well being. Be sure to get your cat tested if you’re bringing home a rescue, and be sure not to miss your scheduled visit to your neighbourhood vet.

Early diagnosis, reliable insurance and good ol’ TLC will mean that even FIV won’t stop your kitty from living its best life.

We love our pets. We want them to always be happy and healthy. At Oyen, we are committed to serving you and your pet the best way possible.

Oyen is a digital-first insurance platform for
pet owners. We are an authorised agent of MSIG Insurance (Malaysia) Bhd.